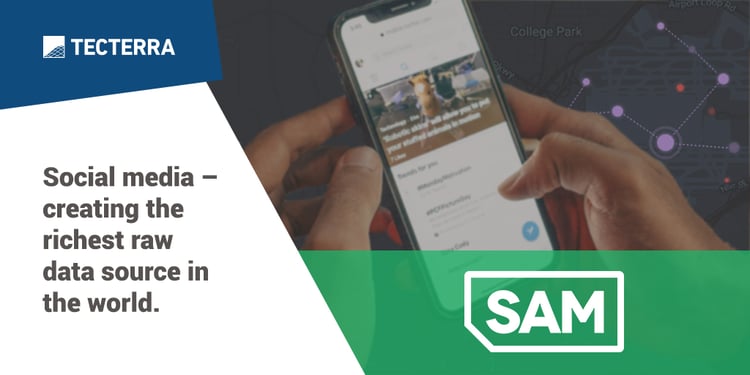 The explosion of social media use in the world has provided the opportunity for an innovative and unique enterprise like SAM to deliver much-needed speedy alerts and situational awareness reports to people and companies around the world.

Founded in Edmonton in 2013, SAM is a global disruption monitoring tool providing clients with valuable real time data - through social media reports - to better understand what is happening anywhere in the world at any time so they can make smarter business decisions, keep their people safe and have access to the stories that really matter to them.

James Neufeld, founder and CEO of SAM, says every day, over one billion statuses, tweets, photos, and videos are uploaded to social media — creating the richest raw dataset in the world, the global sensory network.

SAM analyzes, detects and delivers the most relevant on the ground information - giving people and companies the advantage of time and context when they need it most.

“Essentially we are a crisis detection and monitoring platform. What we do is we’ve created an artificial intelligence engine that is able to spot crisis events from social media chatter,” says Neufeld. “So if you can imagine everyday citizens being equipped with increasingly smarter and smarter devices that are increasingly connected, sharing what’s happening right in front of them.”

For example, the Easter Sunday bombings in Sri Lanka that killed more than 250 people were first reported on Twitter.

SAM today has offices in both Edmonton and London, England.

“The problem is that it’s quite literally a needle in a haystack problem. It’s there. We know events are on the social media platforms and we’ve developed a system rather than relying on analysts or journalists, for that matter, rather than having to manually spot these we created a system that spots them, verifies them and triangulates them essentially just using artificial intelligence,” says Neufeld.

“The core essentially that we provide is a crisis detection platform so that when world events that might impact the safety, operations of companies, they’d get a speed advantage typically between 30 minutes to an hour ahead of major news media outlets to those types of critical events.”

Clients are very diverse ranging from corporate security teams at some of the world’s biggest companies to airlines and municipalities.

Some of these large firms might have comprehensive operations in locations that experience unstable climates from either a geopolitical standpoint or a security and safety perspective.

“We can give them the early signal to be like ‘hey we’re hearing of a coup attempt or there are reports of an explosion on a main street or the airport. You need to start thinking about your contingency plans’,” explains Neufeld. “That’s really the core value proposition. When information is most sparse which is typically the first 30 minutes of any incident that’s where SAM tries to excel.

“When there is no information available social media is incredibly important. That time advantage becomes incredibly important. The first 30 minutes of any crisis is always the most critical. If you want to have an effective response strategy in terms of saving human life . . . your potential to respond effectively diminishes drastically by every minute that passesgoes past. So that first 30 minutes of any crisis is the most valuable in terms of effectiveness and monitoring losses.”

Neufeld’s background is in news and media industry as he worked in the technology side of finding and gathering news. One of the recurring issues was the resources and skill set required to extract the info from social media just wasn’t there.

“We initially set out to build a power search tool that would kind of supercharge journalists within the newsroom that would allow them to search across multiple social media platforms and essentially find things. Ultimately it was a flawed approach in that we had built a faster horse to use that analogy. We had built something that had really made it more efficient and faster but still at the end of the day it required a human to do the process,” says Neufeld.

“What we did to essentially get to where we are today is about 18 months ago started to build an AI (artificial intelligence) engine to do what journalists would have done in the newsroom as a manual process. We set an ambitious goal to see if we could automate that entire process . . . Along the way we realized just how important news and information was to so many non-news clients.”