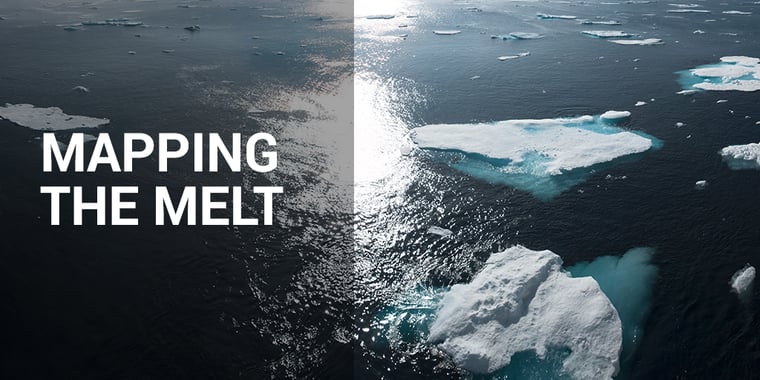 The Planpincieux glacier is melting, and that’s an especially troublesome problem because it hangs just above the Val Ferret, a popular tourist area on the Swiss-Italian border. Uncharacteristically high temperatures this summer caused a large fissure to form in the glacier, which is part of the Mont Blanc massif; experts estimate that some 250,000 cubic metres of ice (the equivalent of 100 Olympic-sized swimming pools’ worth of water) could soon tumble into the valley below, threatening lives and livelihoods.

Scientists have been mapping the decline of Planpincieux and the other glaciers in the European Alps for decades, using satellite imagery—which has a 6-12-day lag time and depends on clear skies. When scientists saw that the ice was moving up to 50 centimeters a day, the decision was made to take more detailed and instantaneous readings, and on September 26, 2019, a new ground-based radar system was installed to constantly measure sub-millimeter movements in the ice.

All over the world, researchers are using geospatial technologies of varying degrees of complexity to measure and map the decline of Earth’s ice sheets.

In the Antarctic, where lives are not immediately impacted by ice movement, researchers have been using interferometric phase signals from synthetic-aperture radar (SAR) to monitor ice behavior. With data from Canada’s Radarsat-1 and Radarsat-2, Japan’s ALOS PALSAR-1, and Europe’s ERS-1 and ERS-2 and Envisat ASAR satellites, teams have been able to map around 80% of the Antarctic continent with unprecedented accuracy. The information they’re collecting will help identify which areas of Antarctica are best for taking ice cores (which can help establish climate history) and creating climate modules for the continent. In 2021, NASA and the Indian Space Research Organization will be launching an interferometric-mode SAR mission that will focus on Antarctica—which means that, soon, we’ll be able to take a detailed look at Earth’s southern pole every 12 days.

In the Yukon, scientists have strapped radar equipment onto skis and are sliding it back and forth across the Kaskawulsh glacier, taking readings of the ice’s depth (which is up to 800 meters in some places). Part of the St. Elias range—the world’s biggest icefield apart from Antarctica and Greenland)—Kaskawulsh has lost 17 km of ice in the last 30 years. Research teams are trying to discover why the ice of the St. Elias glaciers is disappearing at a greater rate than in any other Canadian mountains.

On the southeast coast of Alaska, researchers are investigating the coastline where the LeConte glacier plunges into the bay of the same name. Using a modified a sonar fish finder dangled off the side of an unmanned boat, they’re recording how quickly the underwater mass of the glacier is melting. These 3D measurements revealed earlier in 2019 that the submarine portions of LeConte are melting much more quickly—to the tune of two orders of magnitude—than scientific theories had predicted.

But perhaps the most meaningful imagery taken of Earth’s changing ice is a little lower-tech than space-based imagery, lower even than a tricked-out fish finder.

With a 360-degree camera mounted between his wings, Victor flew above the European Alps in early October 2019. The video he captured of glaciers in France, Germany, Italy, Switzerland and Austria shows a once-icy landscape now brown and dry. The organizers of this avian event hope that seeing such images will prompt people to take whatever actions they can to help advocate against and arrest climate change.