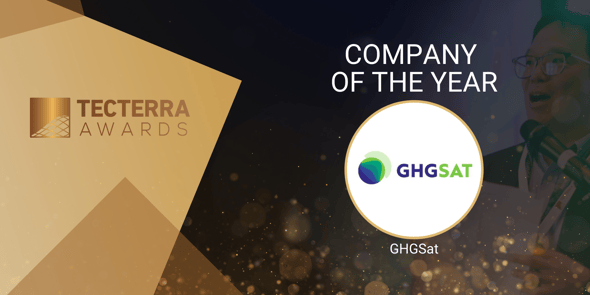 GHGSat, a Canadian based company, has become a global leader in high-resolution greenhouse gas and methane emission monitoring. The company recently launched a new satellite, Iris, with technology that detects emissions from sources 100 times smaller than any other satellite system.

GHGSat is this year’s Company of the Year recipient for the TECTERRA Awards - developed to create a platform in celebration of the leaders and technological disruptions in geospatial.

Stephane Germain, President and CEO of GHGSat, said the private company is on a mission to become the global reference for remote sensing of greenhouse gas, methane, air quality gas, and other trace gas emissions from any source in the world.

“GHGSat owns and operates its own satellites and aircraft sensors to measure greenhouse gas and methane emissions from industrial facilities around the world. We have two satellites in orbit right now, and we have a third one launching in January. Each one orbits the planet 15 times a day and gets tasked anywhere around the world to look at industrial facilities.” said Germain.

He dives deeper and adds, “We also deploy an airborne variant of the same sensor found on our satellites out of Calgary to locations across North America. This instrument affords higher resolution and a lower detection threshold in comparion to the satellites. The data from these two platforms are complementary. We integrate it all into our proprietary analytics, together with data from a variety of other sources, to provide actionable insights to our customers.”

Using proprietary AI and machine learning algorithms, GHGSat analytics combines the company’s unique measurements from space with several other sources of geospatial information including visual, multispectral, hyperspectral, and SAR data from other satellites to extract additional insight and help better point its own sensors by tipping and cueing observations to areas of greatest interest.

“If you look across all anthropogenic greenhouse gas and methane emissions worldwide, the five largest ones are oil and gas, power generation, mining, agriculture, and land waste management (landfills). Fifty percent of our current business is with the oil and gas industry, not only because methane has an environmental impact 84 times greater than CO2, but also because it’s the product, and losing it to leaks means a loss in revenue. In Canada, Alberta is the epicenter of the oil and gas industry, which is why in the first years of the business, I spent considerable time in Calgary to validate the business case and build relationships. It soon became obvious that we needed a permanent presence in Calgary and opened an office which is now growing rapidly.” he said.

The energy giant Suncor Energy, one of the company’s earliest supporters, introduced GHGSat to COSIA (Canada’s Oil Sands Innovation Alliance), with whom the company is measuring emissions from tailing ponds and mines in oil sands.

The vast majority of the company’s clients are industrial operators, government regulatory agencies such as the Alberta Energy Regulator, as well as research groups, industry associations, scientists and academia.

“It started out as an idea and a handful of employees - and we were fortunate enough to be able to attract some pretty sizable anchor customers, like Suncor and Hydro Quebec, which in turn helped grow our team and technology. ” said Germain.

The company was established in 2011 and now has just over 70 employees, growing quickly to a team of 100 people by the summer of 2021.

“At the beginning we were very, very thin. We had a group of five people and three or four major subcontractors that had about 50 people working on our project. We launched our first satellite in June 2016, and our goal was to prove that the technology worked because many people were skeptical about whether it was even possible to measure emissions directly from industrial sites at high-resolution. It’s a pretty Herculean challenge that we’ve taken on. Once we proved that the technology worked, things started snowballing. We got new external investment, we hired more people, started building two more satellites and our aircraft system, and we opened another office in Ottawa. We’ve now reached a point where the company has raised over US$55 million in financing. We’re about to launch our third satellite early in the New Year, and the construction of 3 more satellites and another aircraft instrument are underway. The wind is in our sails. There’s a huge amount of interest for what GHGSat is doing, and we’re really excited to see the company expand, serve our customers and help them address their climate change needs.”